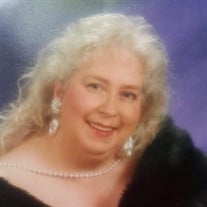 Anna Lou Eden, 72 of Brookfield, passed away Wednesday, June 30, 2021at Boone Hospital, Columbia, MO. Anna Lou Eden daughter of John Milton Hunter and Fannie Jane Sturgess Hunter was born on March 16, 1949 in Marceline, MO. On April 20, 1973 she married Larry R. Eden in Marceline, MO. Larry preceded her in death on October 3, 2020. Anna was a member of the Linneus First Baptist Church. She enjoyed reading romance books and her favorite was the Amish series. She would sit for hours watching the birds and squirrels. Anna loved her family and found joy in her grandchildren and great-grandchildren. Anna is survived by her seven children, Heather Glass and David of Linneus, Delicia Sanchez of Huntsville, John Henry Eden and wife Chandra of Brookfield, Corey Eden and wife Paula of Salibury, Heidi Eden and Mark of Brookfield, Steven Eden and wife Lesie of Moberly, and Larry Eden Jr. of Brookfield, fifteen grandchildren, eight great grandchildren, one sister, Janet Sportsman, one brother Paul Hunter, and several other relatives. She was preceded in death by her parents, husband Larry Eden, and two infant brothers. Visitation will begin at 12:00 pm. Saturday, July 3, 2021 at the Parklawn Memorial Garden Cemetery, Brookfield, MO. with a Graveside Service to follow at 1:00 pm. with Pastor James Sheffield officiating. We are requesting that guest social distancing and to wear a mask. Services are under the direction of the Rhodes Funeral Home, Brookfield. Memorials have been suggested to the Family for funeral expenses and make payable to Heidi Eden and can be left at or mailed to the Rhodes Funeral Home, 216 Linn Street, Brookfield, MO. 64628. On-line condolences can be made at www.rhodesfh.com

The family of Anna Lou Eden created this Life Tributes page to make it easy to share your memories.