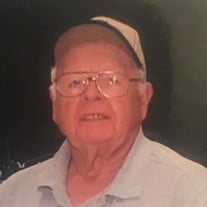 Billy Joe (Bill) Hayes Billy Joe (Bill) Hayes, age 85, of New Cambria, MO passed away on November 12, 2020 after a short bout with cancer. The eighth of nine kids, Bill was born in 1934 to Arthur and Katie Hayes. He grew up, and spent most of his life, on the family farm where he raised livestock and baled acres and acres of hay. He graduated from Macon County R-IV High school in New Cambria and worked at the beef packing plant and Toastmasters in Macon, MO for many years prior to retiring. Bill was a tough old farmer who loved his kids, his cows, and his cars. He was a tinkerer who never met an engine he couldn't get running again. He enjoyed spending holidays and vacations with his companion, Bonnie, and with his family. Bill enjoyed traveling and camping. He began attending the Missouri State Fair in the 1950s and went every year for as long as he was able. In his last years at the fair, he would always make a beeline for the honey ice cream. Bill loved the buffet at Don's in Huntsville and the chicken tenders at Apple Basket in Macon where he often ate with his kids when they were in town. He especially loved to talk about his youngest great-granddaughter, his little namesake, Josey, who was named for Great- Grandpa Billy Joe, Grandpa Randy Joe, and daddy Kyle Joe. Bill always had a grin and a laugh when he talked of Josey's antics. Bill leaves behind a large family that includes three sisters: Mable Bennett, Eileen Taylor, and Grace Lauer; four children: Jeannie (Hayes) Pope of Marceline, MO, Randy Hayes and wife Danna of Bucklin, MO, Lisa (Hayes) Garnier and husband Steve of Leeton, MO, and Beth (Hayes) Watts of Macon, MO; four grandchildren: Elizabeth (Hayes) Skinner and husband Adam of Marceline, MO, Kyle Hayes of Marceline, MO, Abigail Watts of Macon, MO, and Libby Watts of Columbia, MO; and six great-grandchildren: Ethan Moore, Ashlyn Skinner Lyla Skinner Josey Hayes, Brayson Watts, and Blaise Watts. He is also survived by his special friend, Bonnie Mcelhaney. He was preceded in death by his parents: Arthur Glen and Katie Pearl Hayes, and five siblings: Marjorie Hawbecker, Beulah Wilson, Leslie Glen Hayes, Betty Oglesbay, and Bobby Hayes. The family will hold a private celebration of life at a later date. To those who wish to honor Bill's life, the family suggests donations to the American Cancer Society, P.O. Box 22478, Oklahoma City, OK 73123 or at 1-800-227-2345.

The family of Billy Joe Hayes created this Life Tributes page to make it easy to share your memories.