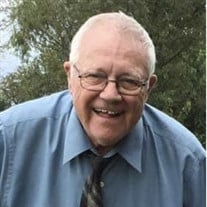 Gail Brown, 77 of Mendon, passed away Friday, April 30, 2021 surrounded by his family. A Celebration of Life Service will be at 6:00 pm. Saturday, June 12, 2021 at the Lion’s Den; Mendon, MO. Arrangements are under the care of the Rhodes Funeral Home. Memorials have been suggested to the Newcomers Cemetery and/or the Shriners Hospital for Children and can be left at or mailed to the Rhodes Funeral Home, 216 Linn Street, Brookfield, MO. 64628. On line condolences can be made at www.rhodesfh.com Gail Brown son of Maynard Marcus Brown and Ada Beatrice (Clark) Brown was born on September 1, 1943 in Aledo, Illinois. On June 10, 1962 he married Peggy Joanne Moore in Mendon, MO. Gail was a member of many organizations and held several offices. He was a member of the Masonic Warren Lodge #74 in Keytesville and was a past Master; past Masonic District Deputy Grand Master and a Masonic District Deputy Grand Lecturer; had his York Rite degree and Scottish Rite degree; and also a member of the Masonic Lodge in Mendon, Ararat Shriner of Kansas City, and the Tri-County Shriner. Gail was a member and pastor of the Mendon Christian Church and the Triplett Christian Church. For many years he was a barber with a shop in Mendon. . For 18 years he served as a Chariton County Commissioners. He enjoyed the outdoors and gardening by taking care of his black berries and growing green beans to can. For many years Gail was the MC for the Sumner Goose festival in Sumner. He loved to talk and visits with people, but most of all he loved his family. Gail is survived by his wife Peggy of the home; one son Chris Brown of Salisbury, MO; one daughter Robin Grossman and Jim of Bogard, MO; seven grandchildren, Zach Brown and Paula, Tiffany Young, Connor Brown and Cambelle Parker, Mylie Brown, Nathan Frock and Jessica, Jacob Frock and Felicia, and Melissa Williams and Michael; thirteen great-grandchildren; one sister Norma Vest of Buffalo, MO; and several other nieces, nephews, and relatives. He was preceded in death by his parents, two sisters Mary Lee Loucks and Dorothy McDowell, two brothers Lloyd Brown and Wayne Brown, and two twin great-grand sons.

The family of C. Gail Brown created this Life Tributes page to make it easy to share your memories.