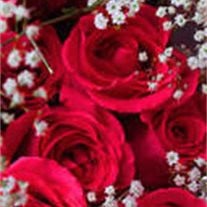 Caroline "Pauline" Wilson age 91 of Brookfield, passed away Thursday September 13, 2012 at Pershing Memorial Hospital. Graveside services will be held at 1:00 pm Monday September 17, 2012 at Parklawn Memorial Cemetery, Brookfield, with Reverend David Blakely officiating. In lieu of flowers memorial donations to the Park Baptist Church Building Fund has been requested and may be sent to Rhodes Funeral Home, 216 Linn Street, Brookfield, Missouri 64628. Pauline was born Caroline Pauline Jones on December 19, 1920 to Eva Gooch and Ed Jones in rural Brookfield. She attended school in the Brookfield school system and graduated from Brookfield High in 1938. She married her husband, Glenn Wilson in 1940 and they had their only child, Gary Richard Wilson in 1941. She worked in Brookfield for many years; at MFA for 11 years, Brown Shoe Factory for 27 years and Circuit Court of Linn County for 12 years. Pauline and Glenn were both lifelong members of Park Baptist Church where she served in many capacities. Being a lifelong resident she enjoyed living in Brookfield and had many friends she enjoyed dearly. Her favorite hobbies were to play caeds and socialize with her friends. She is survived by her son, Gary WIlson and his wife Judy; two grandsons, Wesley Wilson of Texas and Robert Wilson of Missouri; brother-in-law and sister-in-law, Hubert and Helen Wilson, Brookfield; nieces and nephews, Dixie Pecsi and her husband Frank and Nancy Wilson, Ronald Bagley and his wife Marion, Kathy Riney and her husband Charles. She is preceded in death by her parents, husband Glenn in 1988 and a sister, Lorene Bagley. Pauline was a wonderful mother, mother-in-law, grandmother, sister-in-law, aunt and friend. She was a loving and caring woman of GOD and will be truly missed by all who knew her.

The family of Caroline Pauline Wilson created this Life Tributes page to make it easy to share your memories.