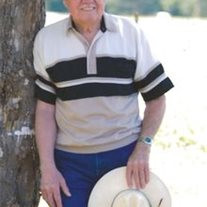 Charles J. Cleveland, 83, Marshall, Texas, passed away Monday October 31, 2011 at Good Shepherd Medical Center, Longview, Texas. Funeral services will be held at 1:00 pm Friday November 4, 2011 at Rhodes Funeral Home with Reverend Mike White officiating. Burial will be in Rose Hill Cemetery. Eagles Session Of Sorrow will be held at 6:00 pm Thursday November 3, 2011 at the funeral home with family receiving friends to follow until 8:00 pm. Memorials have been suggested to the American Cancer Society and may be left at or mailed to the funeral home, 216 Linn Street, Brookfield, Missouri 64628. Charles was born on September 25, 1928 in Brookfield, son of Loren and Emma Louise Mairs Cleveland. On March 15, 1950 he was married to Juanita Maxine Stufflebean. They enjoyed 61 years of marriage together and had recently moved to Texas. She preceded him in death on May 17, 2011. He is survived by a son, Bob and wife Linda Cleveland, Frankfort, Indiana; two daughters, Betty and husband Mike Saus, St. Louis and Thomilee and husband Dana Doan, Marshall, Texas; eight grandchildren and nine great-grandchildren; one brother, Jim and wife Wilma Jean Cleveland, Brookfield and several nieces, nephews and other relatives. Charles was also preceded in death by his parents, one brother and three grandchildren.

The family of Charles J. Cleveland created this Life Tributes page to make it easy to share your memories.