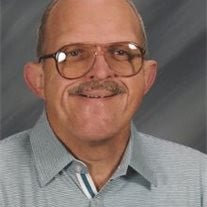 Charles Vernon Gash, 68, Brookfield, passed away on Wednesday April 20, 2011 at his home. Funeral services will be held at 2:00 pm Saturday April 23, 2011 at Grace Baptist Church, Brookfield with Pastor Kelly Bodwell officiating. Burial will be in Rose Hill Cemetery. Visitation will begin at 12:00 pm Friday April 22, 2011 at Rhodes Funeral Home with family receiving friends and relatives from 6:00 pm - 8:00 pm. Memorials have been suggested to Grace Baptist Church or Pershing Home Health and may be left at the church or sent to the funeral home, 216 Linn Street, Brookfield, Missouri 64628. Charles Vernon, son of Charley Gilbert and Verna Elouise Peavler Gash was born on March 13, 1943 in Brookfield. On October 12, 1963 he married Shirley Switzer in Marceline. He was employed with Brookfield School District and worked as a custodian. He was a member of Grace Baptist Church. He is survived by his wife, Shirley, of the home. Daughter and son-in-law, Cheryl and Robbie WIlliams, Brookfield. Son and daughter-in-law, Darryl and DuLane Gash, Conway, Ark. Grandchildren, Phillip Wright and Greg and Jennifer Wright, Brookfield. Great-granddaughters, Kaleena and Alexis Wright, Brookfield. Sister-in-law and her husband, Frances and William Bade, Lee's Summitt. Brother-in-law and his wife, Floy and Linda Switzer, DeSota, Ks. Several nieces, nephews and other relatives. Charles was preceded in death by his parents and an infant granddaughter.

The family of Charles Vernon Gash created this Life Tributes page to make it easy to share your memories.