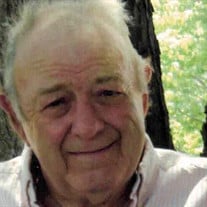 Charles Eugene Wilson, age 74, of Laclede, parted with his earthly home Monday, January 21, 2019 at McLarney Manor, Brookfield. A funeral service will be held at 2:00 PM at Rhodes Funeral Home on Saturday, January 26, 2019 with Pastor Richard Cassidy officiating. Burial will follow at Laclede Cemetery, Laclede, MO. A visitation will be held at Rhodes Funeral Home on Friday, January 25, 2019 from 6:00 – 8:00 PM. Online registry at www.rhodesfh.com. Charlie, son of George Raymond Wilson and Dorthy Elizabeth (Foster) Wilson, was born on February 7, 1944. Charlie grew up in Laclede becoming a staple in the community leaving us with mischievous stories and fond memories. He met his love at the age of thirteen, chasing her for many years. On July 4, 1962 Carolyn Lee Keune committed to the chase and married Charlie. On June 15, 1963 they had their only child, Pamela Kay. He was a man that worked hard, and played just as hard. At a young age he was doing odd jobs, delivering newspapers, and farming. He worked at the Massey Ferguson dealership in Laclede and would later open his own mechanic shop just around the corner. With a move to Cole Camp, Mo, he began a carpentry career and soon owned LEK, a commercial door company. In the eighties, Charlie became a backhoe operator and later superintendent for the HICS military missile program with Western States Construction. He came back to the Linn County area working construction and carpentry, partnering in a business (W&W Construction) and later working for Fuqua Homes. Playing hard was easy with all his hobbies. He loved to hunt, fish, shoot pool, bowl (once bowling with pros on TV), and to drink “a little” beer with friends. From honky tonk dancing, to state fairs and weekend hog roasts, Charlie enjoyed life. He was an excellent mechanic, enjoying tractor pulling (even rebuilding blown tractors under picnic pavilions overnight), old cars and just about anything he could get his hands on. The least to say, he was a “jack of all trades.” Charlie will be most missed as the husband, father, papa, and mentor that he was. A lot have looked up to him over the years, taking in his caring words, enormous smile, and distinct chuckle. Charlie is survived by his wife, Carolyn, of the home; one daughter, Pam McNicol, and husband James, Carrolton; four grandchildren, Gary Brown (Gc), Laclede; Michael Brown and wife Jennifra, Brookfield; Charles Brown (Charlie), Trenton; and Steven Brown, Columbia; four great-grandchildren, Mathew and Caleb Brown, Brookfield; and Courtney and Quincey Jessen Chillicothe. He was preceded in death by his father, George Raymond Wilson, his mother, Dorthy Elizabeth (Foster) Hoselton, infant brother, George Randall Wilson, Stepfather, Elvin Glenn Hoselton, great-grandson Alexander Ryan Brown, and many friends he called family

The family of Charles Eugene Wilson created this Life Tributes page to make it easy to share your memories.

Charles Eugene Wilson, age 74, of Laclede, parted with his earthly...