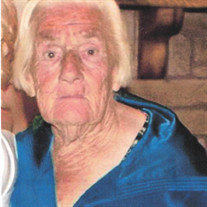 Della Elizabeth Montgomery, 95 of Brookfield, passed away Thursday, February 11, 2021 at McLarney Manor, Brookfield, MO. A Memorial Visitation will be from 4:00 pm. to 6:00 pm. Friday, February 26, 2021 at the Rhodes Funeral Home; Brookfield, MO. Memorials have been suggested to the Family for funeral expenses and can be left at or mailed to the Rhodes Funeral Home, 216 Linn Street, Brookfield, MO. 64628. On line condolences can be made at www.rhodesfh.com Della Elizabeth daughter of Charles Crandell and Martha (Groves) Crandell was born on March 15, 1925 in Triplett, MO. In February 1948 she married Charles Montgomery. Charles preceded her in death on August 6, 1979. Della worked at CaBrook and Dura Automotive most of her life. She lived in Triplett and Mendon area for several years before moving to Brookfield. Back in the day, Della liked going to ballgames and fishing with McLarney Manor. She also enjoyed quilting and doing craft projects. Della was known by many and will be missed by family and friends. Della is survived by John and Cindy Montgomery and family of Sumner, Everett and Karen Leighty from Cabool, Wilma Furthey of Brookfield, Joyce Stobaugh of Brookfield, Jane Allen of Chillicothe, several grandchildren, several great-grandchildren, several great great-grandchildren, and many other relatives. She was preceded in death by her parents, Charles and Martha, husband Charles, son Bob Montgomery, infant daughter, sister Maxine Sharp, and brother Everett Crandell.

Della Elizabeth Montgomery, 95 of Brookfield, passed away Thursday, February 11, 2021 at McLarney Manor, Brookfield, MO. A Memorial Visitation will be from 4:00 pm. to 6:00 pm. Friday, February 26, 2021 at the Rhodes Funeral... View Obituary & Service Information

The family of Della Elizabeth Montgomery created this Life Tributes page to make it easy to share your memories.