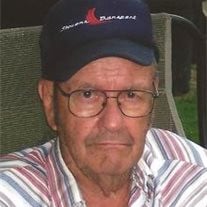 DONALD L. JACOBS Donald L. Jacobs, 81 of Brookfield, passed away Tuesday, March 26, 2013 at Boone Hospital in Columbia. Funeral services will be held at 10:00 a.m. Saturday, March 30 at Rhodes Funeral Home with Rev. Bill Montgomery officiating. Burial will follow at Nester Chapel Cemetery. Visitation will begin at 2:00 p.m. Friday at the funeral home with family receiving friends from 6:00 to 8:00 p.m. Memorials in Donald's name may be made to the family or Nester Chapel Cemetery and may be left at or mailed to the funeral home at 216 Linn Street, Brookfield, MO 64628. On-line condolences may be left at www.rhodesfh.com. Donald was born January 4, 1932 in New Boston, Missouri, the son of Clarence Ray "Tom" and Sarah Alpha Richardson Jacobs. He graduated from Shelby High School in 1950. He married Iris Chaffee in Linneus on March 1, 1951. She preceded him in death May 3, 1966. On February 5, 1971, he married Jaynice Akers in Laclede, MO. He worked at Stanbury Uniforms for many years until his retirement. He enjoyed breaking horses and working them as a team. He was a long-time member of Nester Chapel and Arrowhead Saddle Club. Donald is survived by his wife Jaynice of the family home in Brookfield, his children: Diane Graves and Donna Highers of Brookfield, Kim and husband Denny Allgood of Ankeny, Iowa, and Mitch and Cheryl Chaffee of Brookfield. Also surviving are thirteen grandchildren and thirty-one great-grandchildren and a beloved nephew, Dennis and wife Cheryl Jacobs as well as numerous nieces, nephews, cousins and other relatives. He was preceded in death by his parents, a son, Dalles Jacobs, sisters, Willodean Coram and Bernice Mairs, brothers, Roscoe, Emerson, and Dean and a son-in-law, Jim Graves.

The family of Donald L. Jacobs created this Life Tributes page to make it easy to share your memories.