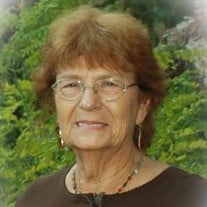 Earlene Browning, age 84, of Brookfield, passed away at her home, Wednesday, October 23, 2019. Visitation will begin at 2:00pm, Saturday November 2, 2019. Memorial service will follow at 3:00pm. The Memorial talk will be given by Bob Bennett Visitation and Services will be at the Kingdom Hall Jehovah’s Witnesses on Highway 36 Brookfield, Missouri 64628 In lieu of flowers, memorials in the name of Earlene Browning have been suggested to be left at the time of the memorial or sent to Rhodes Funeral Home, 216 Linn Street, Brookfield, MO 64628. Online registry at www.rhodesfh.com Earlene, daughter of Earl Verne Griffin and Anna Margaret (Wagoner) Griffin, was born on October 5, 1935 in Grundy County, Missouri. On January 26, 1958 she married the love of her life Richard Doyle Browning in Grundy County, Missouri. They shared over 61 years together. Her life was devoted to being a loving wife and mother. She worked as a beautician for several years. She also worked hard building fence in Missouri and Colorado alongside her husband and children for many years. She was a gentle person who loved children and animals. She enjoyed breeding and raising dogs for many years. Earlene was a member of the Brookfield Congregation of Jehovah’s Witnesses. She enjoyed sharing Bible truths with others. Friends often spoke of her grace, kindness and strength. Her kind and positive way was an inspiration to many. Earlene is survived by her husband Richard, of the home; her children Teresa Harris (Darrell), Terry Browning (Carol), Gary Browning (Terria), and Rebecca Montebetti; her grandchildren, Jan Harris, Jenny Hunt (Jim Bob), Kyle Harris (Maddie), Tayra Douglas, Jerry Parker, Lilly Montebetti and Michael Motebetti; one brother, Richard Griffin (Linda); one sister in law, Vivian Griffin; and several great-grandchildren. Earlene was preceded in death by her parents, one brother, Charles Griffin, and one grandson, Ryan Harris.

Earlene Browning, age 84, of Brookfield, passed away at her home, Wednesday, October 23, 2019. Visitation will begin at 2:00pm, Saturday November 2, 2019. Memorial service will follow at 3:00pm. The Memorial talk will be given by Bob Bennett Visitation... View Obituary & Service Information

The family of Earlene Browning created this Life Tributes page to make it easy to share your memories.

Earlene Browning, age 84, of Brookfield, passed away at her home,...