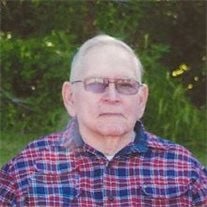 Gayle Cole Biswell, age 84, of Brookfield, passed away Tuesday, March 6, 2018 at Liberty Hospital, Liberty, Missouri. A funeral service will be held at 10:00 am, on Monday, March 12, 2018 at Park Baptist Church with Reverend David Blakely officiating. Burial will follow at Park Lawn Cemetery. A visitation will be held from 6:00 pm to 8:00 pm on Sunday, March 11, 2018 at Rhodes Funeral Home with a Masonic service beginning at 5:30 pm. Memorials have been suggested to Animal Shelter of Linn County and may be left at or sent to the funeral home, 216 Linn Street, Brookfield, Missouri 64628. On-line registry at www.rhodesfh.com Gayle Cole, son of Cole Younger Biswell and Flossie Mae (Hill) Biswell, was born on March 15, 1933 in Brookfield, Missouri. On September 27, 1952 he was united in marriage to Deloma Lea Davis. She preceded him in death on October 14, 2012. Gayle worked as a Maytag repairman for forty-seven years and was a member of the Park Baptist Church, Brookfield. He was also a Mason for over fifty years. He is survived by three sons, Ronald Biswell and wife Ozella, Brookfield; Garry Biswell and wife Johny, Brookfield; and Erich Biswell and wife Christy, Chesapeake, Virginia; his grandchildren, Melissa Singleton and husband Daniel , Purdin; Amber Beavers and husband Greg of Arlington, Tennessee; Parker Biswell and Cooper Biswell, both of Chesapeake, Virginia; five great-grandchildren, Hope, Mason and Nathaniel Singleton, Purdin; and Carson and Conner Beavers, Arlington, Tennessee, as well as several other family members and friends. Gayle was also preceded in death by his wife Deloma, his parents, and two sisters, Gladys O'Dell and Goldie Biswell

The family of Gayle Cole Biswell created this Life Tributes page to make it easy to share your memories.