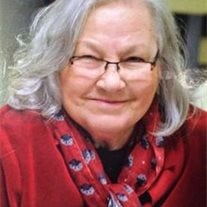 Gladys Ruth (Frazier) Stufflebean, age 91, passed away July 5 surrounded by family at her home in Brookfield, Missouri after a brief battle with cancer. Gladys was born on February 12, 1923 in Sullivan County, Missouri to Alfred Ray and Sarah Jane Frazier. Gladys had three sisters and one brother; Ethel Morris, Lula Savinson, Myrtle Dewitt, and Robert Frazier. Gladys was married in 1938 to the late Gerald Emerson Stufflebean at Linneus, Missouri. They were married for 41 years before his passing in July 1979. Gladys attended school in Sullivan County and graduated from Brookfield High School. Gladys owned and operated Stufflebean Upholstery for more than 40 years and also did personal sewing of wedding gowns and garments. She enjoyed writing poetry and spending time with family. She is survived by her children and their spouses, Jerry and Peggy Stufflebean, Robert and Sharon Grimshaw, Kenneth and Mary Stufflebean, Russell Stufflebean, Connie Stufflebean, and Darryl and Cindy Stufflebean, 19 grandchildren and 42 great grandchildren and four great, great grandchildren and several nieces and nephews. She was preceded in death by her husband, Gerald, and one son, Douglas Ray Stufflebean. Visitation will begin at 6 p.m. on Thursday, July 10 at the Evangelical United Methodist Church, 715 S. Brunswick St., Brookfield. Funeral Services will be held Friday, July 11 at 2 p.m. with Rev. Bill Montgomery officiating. Interment will be at Rose Hill Cemetery. Rhodes Funeral Home is handling arrangements. Family and friends will be received at the home of Robert and Sharon Grimshaw, 1208 Crest Road, Brookfield after the interment. Affectionately known as Grandma Bean, she will be truly missed by all who had the opportunity to know and love her.

Gladys Ruth (Frazier) Stufflebean, age 91, passed away July 5 surrounded by family at her home in Brookfield, Missouri after a brief battle with cancer. Gladys was born on February 12, 1923 in Sullivan County, Missouri to Alfred Ray and Sarah... View Obituary & Service Information

The family of Gladys Stufflebean created this Life Tributes page to make it easy to share your memories.