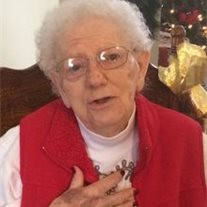 Helen Anna Walsh, age 94, of Brookfield, passed away Saturday, April 28, 2018 at Life Care Center of Brookfield. A Funeral Mass will be held at 10:30 AM, Wednesday, May 2, 2018 at Immaculate Conception Catholic Church, Brookfield, with Father Gerald Kaimann officiating. Burial will follow at St. Michael's Cemetery. Visitation will be held from 6:00 to 8:00 PM on Tuesday, May 1, 2018 at Immaculate Conception Catholic Church; with a rosary beginning at 5:30 pm. In lieu of flowers, memorials have been suggested to Immaculate Conception Church and may be left at or sent to Rhodes Funeral Home, 216 Linn Street, Brookfield, Missouri 64628. On-line registry at www.rhodesfh.com Helen Anna, Daughter of Edward Schreiner, and Katharine (Kordick) Schreiner, was born on January 30, 1924 in Timberlake South Dakota. On August 7, 1943 she was united in marriage to Gene Walsh in Brookfield, Missouri. He preceded her in death on July 15, 1998. Helen was a life-long member of Immaculate Conception Church, Brookfield, as well as a member of the Alter Society, the Knights of Columbus Auxiliary and the Stains Club. In her spare time she enjoyed quilting, embroidery, and gardening. She is survived by her children, Ronnie Walsh and wife Mary Ann, KCMO; Roger Walsh and wife Cindy, Brookfield; Randy Walsh and wife Donna, Platte City, MO; one daughter in law, Linda Walsh, Kearney, MO; one son in law, Vic Quigley, Liberty, MO; Eleven grandchildren, and twenty-two great-grandchildren. Helen was also preceded in death by her parents; one son, Bob Walsh; one daughter, Regina (Sis) Quigley; six brothers; and one great-granddaughter, Anna Sprague.

Helen Anna Walsh, age 94, of Brookfield, passed away Saturday, April 28, 2018 at Life Care Center of Brookfield. A Funeral Mass will be held at 10:30 AM, Wednesday, May 2, 2018 at Immaculate Conception Catholic Church, Brookfield, with Father... View Obituary & Service Information

The family of Helen Anna Walsh created this Life Tributes page to make it easy to share your memories.