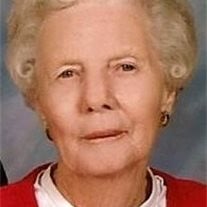 Helen A. Wilson, 92 years of age, formally of Brookfield, MO passed away peacefully and was called to Heaven October 24, 2016 She was born January 10, 1924, the daughter of Edward T. and Vivian Alta Brown, in Linneus, MO. With her husband,... View Obituary & Service Information

The family of Helen A. Wilson created this Life Tributes page to make it easy to share your memories.