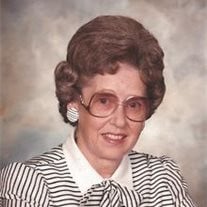 HILDRED R. GARR Hildred R. Garr, 85 of Brookfield, passed away Tuesday, January 1, 2013 at McLarney Manor. Funeral services will be held at 11:00 a.m. Saturday, January 5, 2013 at Freedom Baptist Church with Pastor Ron Adrian officiating. Burial will be in Parklawn Memory Gardens. Visitation will be held Friday, January 4, 2013 at the church from 5:00 to 8:00 pm. Memorials in Hildred's name have been suggested to Freedom Baptist Church Building Fund or McLarney Manor Activity Fund. Donations may be left at or mailed to Rhodes Funeral Home, 216 Linn St., Brookfield, MO 64628. On-line condolences may be left for the family at www.rhodesfh.com. Hildred Ruth was born October 4, 1927 in Mendon, Missouri, the daughter of James Leo and Anna Belle Craigg McCollum. On March 17, 1946, she was united in marriage to Ervin E. "Pete" Garr in Boonville, Missouri. She was a member of Freedom Baptist Church. She was always very active in the church and church choir. She enjoyed gardening and sewing. Most of all, she loved being a grammy to her grandchildren and great-grandchildren whom she dearly loved. She was very active in 4H where she served as a club leader and projects leader for many years. Hildred is survived by her husband, Ervin "Pete" Garr of Brookfield, one daughter: Sharon and husband Gary Howell of Brookfield, two granddaughters: Melissa and husband Shawn Kearns of Brookfield and Ginger and husband Patrick Burks of Columbia. Also surviving are six great-grandchildren: Brittany, Ashley, Megan, and Karissa Kearns and Emily and Madeline Burks, one sister: Mildred Sullivan of Rock Island, IL, a sister-in-law: Leona Otey of Bloomington, IL as well as numerous nieces and nephews. She was preceded in death by her parents and four brothers: Howard, Virgil, James, and Jack McCollum.

The family of Hildred R. Garr created this Life Tributes page to make it easy to share your memories.