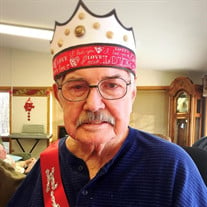 Jackie D. George, age 85, went to be with our Lord and Savior on Tuesday, January 12, 2021. Jackie lost his battle with complications of the corona virus. Graveside will be at 3:00 pm. Wednesday, January 20, 2021 at White Oak Cemetery, Browning, MO. with Kyle Waldrep officiating. We are recommending social distancing and to wear a mask. Memorials are of the Family Choice and can be left at or mailed to the Rhodes Funeral Home, 216 Linn Street, Brookfield, MO. 64628. On line condolences can be made at www.rhodesfh.com Jackie was born to Hardin Clay George and Lola Mae (Hollon) George on August 3, 1935 who both preceeded him in death. Jackie was also preceeded in death by three brothers Donald George, Glen George, and a unnamed infant brother; five sisters Roxie Weatherby, Vera West, Janie Head, Darlene Richardson, and a unnamed infant sister. He is survived by numerous nieces and nephews. Jackie was raised in the Browning area where he attended Browning School. He moved to Brookfield in 1996. Jackie loved it when his girls (as he referred to them) would bring him special meals to the nursing home. Many times Jackie would brag to the other residents when his nieces Debbie, Stacie, and Shelley would take cupcakes for parties at McLarney Manor. They always had to be chocolate cake with chocolate icing and Uncle Jack always got what he wanted. Debbie and Kyle thought they would get one over on Uncle Jack during a recent Christmas party (2019) at McLarney Manor by dressing up as Santa and Mrs. Claus, but there was no fooling him as he knew who Santa was the whole time. If there was ever anyone that deserved to enjoy an eternal rest in peace it would be Jackie D. George. A precious one from us has gone, His voice we loved is still; A place is vacant in our hearts, that never can be filled; The blow was heard, The shock severe, We never thought his death so near; Only those who have lost can tell the pain of parting without farewell.

Jackie D. George, age 85, went to be with our Lord and Savior on Tuesday, January 12, 2021. Jackie lost his battle with complications of the corona virus. Graveside will be at 3:00 pm. Wednesday, January 20, 2021 at White... View Obituary & Service Information

The family of Jackie D. George created this Life Tributes page to make it easy to share your memories.