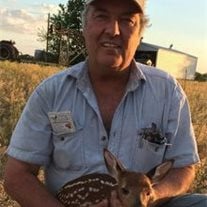 John Dale Roe, age 59, of Brookfield, passed away on Saturday, March 17, 2018 at the Mayo Clinic-Methodist Hospital in Rochester, MN. A funeral service will be held at 10:00 am, on Friday, March 23, 2018 at Trinity United Methodist Church, Brookfield, with Pastor Arch Philips officiating. Burial will follow at Rose Hill Cemetery. Visitation will be held on Thursday, March 22, 2018 from 6:00-8:00 pm at Trinity United Methodist Church, Brookfield. Memorials have been suggested to the Gift of Life Transplant House, Rochester, MN. and may be left at or sent to the funeral home, 216 Linn Street, Brookfield, MO 64628. On-line registry at www.rhodesfh.com John Dale, son of Harold Glenn Roe and Fern (Winfrey) Roe, was born on July 10, 1958 in Marceline, MO. On August 20, 1983 he was united in marriage to Charlene Selway in Kahoka, MO. John was a member of South Eagle United Methodist Church and a member of the Elks. John loved God and his family. His greatest joy was hunting with his son Garrett. He enjoyed the outdoors and spent his life farming. John lived his whole life in Linn County. John was very playful and lighthearted with his brother, nieces and nephews. He loved to laugh and have a good time. He was fiercely loyal to those he loved and true to tradition. John lived a life true to himself and the Lord. John is survived by his wife Charlene, of the home; one son, Garrett Roe, Brookfield; his parents, Harold Glenn and Fern Roe, Laclede; one brother, Paul Roe, Laclede; one sister, Nancy Griffith and husband Todd, Warrensburg; his mother-in-law Neva Selway, Williamstown; one brother-in-law, DeWayne Selway, Williamstown; five nieces, Kylie Selway, Williamstown; Hannah Griffith, Sarah Griffith, Karah Griffith, and Ellah Griffith, all of Warrensburg; two nephews, Nathan Griffith and Justus Griffith, both of Warrensburg; one aunt, Jean Karnes, Braymer; as well as many cousins other family members and friends. John was preceded in death by his grandparents, Harold and Bernice Roe; his father-in-law, Charles Selway; and his infant son, David Roe

John Dale Roe, age 59, of Brookfield, passed away on Saturday, March 17, 2018 at the Mayo Clinic-Methodist Hospital in Rochester, MN. A funeral service will be held at 10:00 am, on Friday, March 23, 2018 at Trinity United Methodist Church,... View Obituary & Service Information

The family of John Dale Roe created this Life Tributes page to make it easy to share your memories.

John Dale Roe, age 59, of Brookfield, passed away on Saturday,...