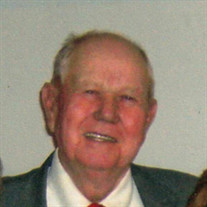 John Elwood Hawkins John Elwood Hawkins, 90 of Ethel, passed way Sunday, December 13, 2020 at the North Regional Medical Center, Kirksville, MO. Visitation will from 12:00 pm. till 1:00 pm. Saturday, December 19, 2020 at the Ethel Christian Church in Ethel, MO. A Family Graveside service with Military Honors provided by the Callao American Legion Post#360 with being at 1:30 pm. Saturday, December 19, 2020 in the Helton Cemetery, Goldsberry, MO. with Pastor Gareth Reese officiating. We are recommending friends and guest to social distancing 6 feet apart and to wear a mask. Memorials have been suggested to the Helton Cemetery and can be left at or mailed to the Rhodes Funeral Home, 216 Linn Street, Brookfield, MO. 64628. On-line condolences can be made at www.rhodesfh.com John Elwood Hawkins was born October 30, 1930, son of Loyal Bruce and Maude Vertees Hawkins, north of Ethel, MO. He graduated from Ethel High School in 1948. On March 22, 1952 he married Hazelle Wilt in Morganfield, KY; He entered into the United States Army in February of 1952. They lived in Morganfield, KY. until he went oversea to Korea in September of 1952 and returned back home January 14, 1954. John farmed all of his life. He had cattle and hayed until he was 75, when he sold off all of his cattle and haying equipment. He liked all sports and even managed some little league teams while his son was growing up. He operated the store in Goldsberry from 1962 to 1968. Then he went to work for the highway department, working out of New Cambria and retired in 1991. John also served on the ASC committee, the Macon Park Board, a Commander of the Ethel American Legion Post#247 for a number of years, was a member of the Ethel Christian Church since 1947, and serviced as a board member, deacon, trustee, and vice chair, and was the president of the Helton Cemetery Board. John is survived by his wife Hazelle of the home; one son Steve Hawkins and his wife Debbie; one grandson Michael Hawkins; one granddaughter Stephanie Grey and her husband Curtis; four great grandchildren; Hannah Strain and husband Cody, Quinten Hawkins, Colton Grey, and Remy Grey; several nieces, nephews, and other relatives. He was preceded in death by his parents; his three sisters Anna Mae Bergman, Dorothy Rummerfield, and Nancy Matlick ; and one brother Paul as an infant.

The family of John Elwood Hawkins created this Life Tributes page to make it easy to share your memories.