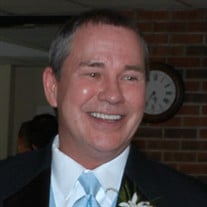 John Wayne Hoyt, age 69, of Kansas City, formerly of Brookfield, passed away on Friday, August 24, 2018 at his home. Funeral services will be held at 1:00 PM on Wednesday, September 5, 2018 at Rhodes Funeral Home, with Sister Mary Rost, SSND officiating. A visitation will be held beginning at 11:00 AM until the time of service. Memorials have been suggested to Preferred Family Drug and Alcohol Treatment Center of Trenton and may be left at or sent to Rhodes Funeral Home, 216 Linn Street, Brookfield, MO 64628. Online registry at www.rhodesfh.com. John Wayne, son of Harold Wayne Hoyt and Lois Louise (Cashman) Hoyt, was born on October 22, 1948 in Chillicothe, MO. On August 8, 1969 he was united in marriage with Ann Elizabeth Brady at the Immaculate Conception Church, Brookfield; they had three children Stacy, Jason, and Matthew. He is survived by his daughter, Stacy Jackson, Brookfield; two sons, Jason Hoyt and his wife, Allison, Matthew Hoyt and his wife, Kelsi, all of Kearney; two brothers, Mark Hoyt, Terry Hoyt and his wife, Debbie, all of Brookfield; one sister, Lisa Simerman and her husband, Greg, Brookfield; four grandchildren, Brooke Lauhoff and her husband, Ryan, Brookfield; Gracelynn Hoyt, Aralynn Hoyt, and Kinsley Hoyt, all of Kearney; one great-granddaughter, Vaeda Lauhoff, Brookfield; as well as several nieces, nephews, and other relatives. John was preceded in death by his parents and grandparents.

The family of John Wayne Hoyt created this Life Tributes page to make it easy to share your memories.