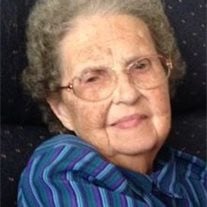 Kathryn Stauber, age 85, of Independence, MO, passed away Tuesday, January 16, 2018 at John Knox Village House, Lee's Summit, MO. Funeral services will be held at 12:00 pm Saturday, January 20, 2018 at Rhodes Funeral Home with Pastor Michael White officiating. Burial will follow at Rose Hill Cemetery. Visitation will begin at 11:00 am until time of service. Memorials have been suggested to United Cerebral Palsy in memory of Dawson Lewis, and may be left at or sent to the funeral home, 216 Linn Street, Brookfield, Missouri 64628. On-line registry at www.rhodesfh.com Kathryn, daughter of George Coram and Flossie (McCollum) Coram, was born on March 5, 1932, in New Boston, Missouri. On April 8, 1953 she was united in marriage to Howard Eugene Stauber in Brookfield, Missouri. He preceded her in death on September 20, 2006. Kathryn enjoyed shopping, going to movies, dining out and travel. She is survived by her daughter, Deborah Stauber; one sister-in-law, Alta Lou Stauber; many nieces, nephews, great nieces and nephews, great-great nieces and nephews, and several other family members and friends Kathryn was also preceded in death by her parents; and her two brothers, Nelson Coram and Russell Coram

The family of Kathryn N. Stauber created this Life Tributes page to make it easy to share your memories.