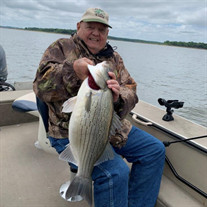 Larry Dean Sattman, age 75 of Winigan, MO; passed away with his family by side, Friday, December 31, 2021 at McLarney Manor Brookfield, Mo. Visitation will be from 10:00 am. to 1:00 pm. Friday, January 7, 2022 at the Rhodes Funeral Home, Brookfield, MO; with a Funeral Service to follow at 1:00 pm. with Pastor Jim Fitzgerald officiating. Burial will be in the Price Cemetery, Winigan, MO; Services are under the direction of the Rhodes Funeral Home, Brookfield, MO. Memorial contributions can be made to the Price Cemetery and can be left at or mailed to the Rhodes Funeral Home, 216 Linn Street, Brookfield, MO. 64628. Online condolences can be made at www.rhodesfh.com Larry Dean son of Carl Sattman and Willadean (Reed) Sattman was born on March 12, 1946 in Kirksville, MO. On June 18, 1966 he was united in marriage to Carol Bennett in Purdin Methodist Church in Purdin, MO. Larry was a member of the Winigan Baptist Church and the Brookfield Elk’s. Larry raised Angus cattle and farmed for more than 51 years. He was an avid quail and turkey hunter and also enjoyed going fishing. Larry loved his family and spending time with his grandchildren and great grandchildren. Larry is survived by his wife Carol of the home, three children, Todd and Tina Sattman of Lee’s Summit, MO; Rodney and Michel Sattman of New Boston, MO; and Michael and Abby Sattman of Brookfield, MO; nine grandchildren, Zach Sattman, Luke Sattman, Garett Sattman, Brock Sattman, Shelby Sattman, Rachel Gladbach, Hunter Sanders, Laken Sattman, and Dirk Sattman, two great grandchildren, Brylnee Gladbach and Asher Templeton, one brother, Gary and Toni Sattman, one sister, Vaudia Sattman and friend Jess Simons, and many nieces, nephews, and other relatives. He was preceded in death by his parents, Carl and Willadean Sattman and one sister Sherrie Ann Wills.

The family of Larry Dean Sattman created this Life Tributes page to make it easy to share your memories.

Larry Dean Sattman, age 75 of Winigan, MO; passed away with his...