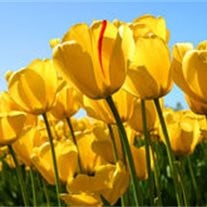 Margaret A. Smith, age 85 of Brookfield, died Friday July 12, 2013 at Life Care Center of Brookfield. A funeral service will be held on Tuesday July 16, 2013 at 12:00 pm at Trinity United Methodist Church, Brookfield, with Reverend Mike White officiating. Burial will be in Elmwood Cemetery, Linneus. Visitation will start at 10:00 am Tuesday at the church and family will receive friends until 11:30 am, at which time there will be an Eagles Session of Sorrow. Memorials have been suggested for the Alzheimer's Association and may be left at the church or sent to Rhodes Funeral Home, 216 Linn Street, Brookfield, Missouri 64628. On-line condolences may be forwarded to www.rhodesfh.com Margaret was born in Laclede on April 2, 1928, daughter of James and Clementine Camlen. She was married to Arthur E. Smith on August 26, 1946 in Kansas City, Kansas. He preceded her in death on May 29, 1956. She is survived by one daughter, Theresa Y. Marks of Drasko, Ar.; three sons, Charles Dee Smith of Chicago, Ill., John A. Smith of Moberly, and James N. Smith and wife Debbie, Brookfield; numerous grandchildren and great-grandchildren. Margaret is also preceded in death by her parents; two daughters, Linda Harrington, and Mona McGraw; one step-son, Richard Lee Smith.

The family of Margaret Ann Smith created this Life Tributes page to make it easy to share your memories.