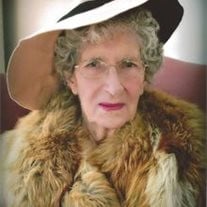 Mary Margaret McNeil, age 95, resident of Pioneer Nursing Home in Marceline, Missouri, passed away Monday January 16, 2017 at Pershing Memorial Hospital, Brookfield. A memorial mass will be held at 5:30 pm Saturday, January 21, 2017 at Immaculate Conception Church, Brookfield. Burial will be at a later date at St. Michael's Cemetery, Brookfield. Memorials have been suggested to S.E.V. (Saving Every Victim) or to the St. Michael's Cemetery and may be left at or sent to Rhodes Funeral Home, 216 Linn Street, Brookfield, Missouri 64628. On-line registry at www.rhodesfh.com Mary Margaret was born on September 10, 1921 in Livingston County, Missouri, the daughter of Charlie Lee Cooper and Helen Marie (Lynch) Cooper. On July 30, 1942 she was united in marriage to Paul J. McNeil who preceded her in death on September 29, 1994. They had two children, William McNeil and Mary Margaret McNeil II. She and her husband managed the Lin-Vue Drive-In in Brookfield in the 1960's. She worked for Brown Shoe Company for thirteen years. Mary Margaret loved Jesus and her church. She was a lifelong member of the Immaculate Conception Church, Altar Society, Legion of Mary, and the Ladies Auxiliary. She was of great help to her church and fellow parishioners, often visiting the sick and helping with communion. Mary Margaret spent ten years volunteering her time to hospice work, where she was known as a compassionate care giver to all she met. Mary Margaret is survived by one brother, Charlie Cooper Jr., St Ann's, Missouri; two sisters, Helen Hedrick, Brookfield, Missouri; and Charlene Babb, Texas; two grandsons, Josh McNeil, Bucklin, Missouri; and Jeffrey McNeil, Kirksville, Missouri; three great-grandsons, fourteen nieces and nephews, and many other family members and friends. Mary was also preceded in death by her parents; her daughter Mary Margaret McNeil II; and one brother, John Cooper.

The family of Mary Margaret McNeil created this Life Tributes page to make it easy to share your memories.