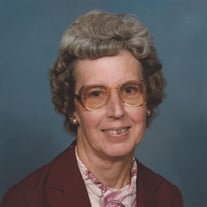 Mida Esther Hanson-Dowell (Pippin), 95, passed away in the home of her daughter, Shirley Thompson, in Brookfield, Missouri, on Wednesday, August 1, 2018. She was born in a farmhouse in rural Macon County on March 20, 1923. Mida was thought to be born prematurely, weighing only 2.5 pounds, to parents Greeley Hansford Pippin and Florence Hays Pippin. She was so small that her head fit inside of a tea cup and her “crib” was a shoebox behind the stove. Her father called her “little mighty” because she survived against all odds. Mida married Leslie John Hanson on February 26, 1949, after which they had four children: Mary Frances, Shirley Esther, Leslie James, and Betty Jean. Mida and Leslie also went on to raise their nephew, Jerry Dewayne, and later adopted her granddaughter, Amy Elizabeth. She was widowed after the untimely death of Leslie in 1971, but found love again many years later when she married Rube Dowell in 1994, only to be widowed again some short five years later. Mida was second born of six children and turned out to be mighty as her father called her, in so many ways. She always said that she was here for a reason and that the Lord had work for her to do. She grew up in the country, where work was hard, formal education was rare, and faith was strong. All were very important to her. After graduating 8th grade, she dropped out of school and had to help support her parents and siblings. This was what laid the groundwork for her long life of hard work and a strong work ethic. In her lifetime, she was very generous with her time and for the causes important to her, and above all else, serving her Lord and Savior, Jesus Christ. In the 1940’s she helped start a union at the Bucklin Poultry House, she assisted with the petition in the 1950’s to bring a Health Department to Linn County to vaccinate children, was a judge at multiple elections, visited and took Sunday school papers to the homebound, and with her grandchildren, provided Christmas treats to nursing home residents. She also wrote many poems, many of which she read at church. She made sure all of her children had the education she was not able to receive and was exponentially proud of their accomplishments-two daughters becoming nurse practitioners, one daughter, an elementary school principal, her son, a lawyer, and her adopted nephew and granddaughter both achieved college education as well. Surviving are her children, Mary (Bruce) Bodeman, Phoenix, AZ; Shirley (Ron) Thompson, Brookfield, MO; L. James (Linda) Hanson, Mt. Vernon, IL; Betty (Kevin) Adams, Tulsa, OK; Jerry (Mikki) Fields, Newburgh, IN; and Amy (Jeff) Williams, Brookfield, MO Surviving grandchildren, Mida Kelley, Joseph (Alicia) Kelley, Todd Thompson, David (Kasey) Thompson, Michael (Samantha Black) Thompson, Julie (Ryan ) Boley, Jill (Jared Chen) Thompson, Ryan Hanson, Leslie Jackson, Aaron Adams, Andrew (Leslie) Adams, Airick (Darin Coffman) Adams, Taryn Hirsch and Cameron Fields. Surviving great-grandchildren, Joshua (Adrienne Gall) Williams, Jessica (Richard Henderson) Williams, Colton Adams, Desiree Adams, Lily Adams, T.J. Reider, Christopher Kelley, Andrew Kelley, Aiden Kelley, Isabelle Thompson, Olivia Thompson, Owen Boley, Riley Hinckle, Molly Boley, Caydin Hosmer, Noah Black, Bentlee Asher, Parker Hirsch and Tucker Hirsch. Mida was preceded in death by her parents, husbands, Leslie and Rube, her siblings Ida Quinn, Tom Pippin, Ira Pippin, Marie Rice, Melita Fields, and one great-grandson, Jacob John Adams. Funeral services will be held at 3:00 PM, Sunday, August 5, 2018, at the Assembly of God Church, Bucklin, with Reverend Ken Wallace and Reverend Everett Bradshaw officiating. Burial will follow at the Masonic Cemetery, Bucklin. Visitation will be held from 6:00 to 8:00 PM on Saturday, August 4, 2018 at the Assembly of God Church, Bucklin. Memorials have been suggested to Bucklin Assembly of God Church and may be left at or sent to Rhodes Funeral Home, 216 Linn Street, Brookfield, MO 64628. On-line registry at www.rhodesfh.com

Mida Esther Hanson-Dowell (Pippin), 95, passed away in the home of her daughter, Shirley Thompson, in Brookfield, Missouri, on Wednesday, August 1, 2018. She was born in a farmhouse in rural Macon County on March 20, 1923. Mida was thought to... View Obituary & Service Information

The family of Mida Esther Hanson-Dowell created this Life Tributes page to make it easy to share your memories.

Mida Esther Hanson-Dowell (Pippin), 95, passed away in the home...