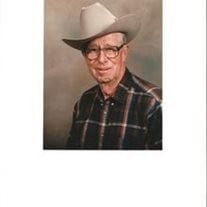 Nelson L. Cattey, 92, Brookfield, Missouri, passed away Monday, December 27, 2010 at McLarney Manor. Mass of Christian Burial 11:00 a.m. Friday, Immaculate Conception Catholic Church, Brookfield, Missouri. Interment St. Michael’s Cemetery. The Family will receive friends 7:00 to 9:00 p.m. Thursday, Rhodes Funeral Home, where a Remembrance Service will begin at 6:30 p.m. Friends may call at the funeral home after 12:00 Noon Thursday. Memorials to the Linn County 4-H Youth Development Foundation or the Alzheimer’s Association may be left at or mailed to funeral home, 216 Linn Street, Brookfield, Missouri 64628. Nelson was born on August 20, 1918 in North Salem, Missouri to Arthur B. and Eunice (Nickell) Cattey. He was raised in the Winigan and Browning areas along with his brother, Emerson and sister, Dortha. He was preceded in death by his parents and siblings. He began his career in farming, which would last throughout his life at an early age raising and showing Shropshire sheep, Jersey cows and turkeys. He was active in FFA as a young man. In 1946 his family moved to Brookfield, Missouri, there he worked for Brookfield Chickeries where he met his future wife. He later worked for MFA and Dannen Mills. In 1952 he and his father dug the foundation for what was originally known as the Cattey Feed & Seed Barn which opened for business in November of the same year. Later the business became a Ralston-Purina dealership receiving numerous awards for excellence through the years. On June 11, 1954 he married Augusta Sheen at Immaculate Conception Catholic Church in Brookfield. Together they owned and operated Cattey Feed & Seed until July 1993. Nelson began his second career as a Registered Black Angus breeder in the early 1960’s. He continued to pursue this passion actively with Cattey’s N-A Angus Farm until 2003. He took great pride in his associations with organizations that encouraged farming traditions, knowledge and skills to others. His memberships and activities have included, the Linn County Fair Board; Missouri Angus Association, where he had served on the board; American Angus Association; Missouri Farm Bureau; Pershing Hospital Board and Immaculate Conception Catholic Church. He was an active supporter of the Linn County 4-H organization where he had served as a member of the Fair Board and provided a meeting place on his farm for many years. Nelson enjoyed working with area youth and took great interest in showing cattle with his own children. He had a wide knowledge of feeds, feeding, nature and animal husbandry. For his efforts he was recognized with induction into the Missouri Angus Breeders Hall of Fame in 1996 and the Missouri 4-H Hall of Fame in 2009. Nelson is survived by his wife of 56 years, Augusta Cattey of the home; his son, James B. Cattey and his wife, Joan of Olathe, Kansas; his daughter, Doris L. Montegna and her husband, Eric of St. Joseph, Missouri; three grandsons, Samuel D., Aaron M. and Arthur B. Cattey all of the Kansas City area and numerous cousins, nieces and nephews. The Family suggests memorial gifts to the Linn County 4-H Board or the Alzheimer’s Association.

The family of Nelson Leon Cattey created this Life Tributes page to make it easy to share your memories.