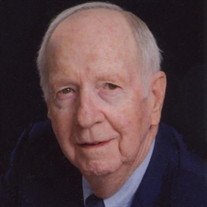 Stanley Varvel Brown, age 90, of Jefferson City. MO/ passed away peacefully on Tuesday, December 21, 2021 at Oak Tree Villas Nursing Home. Stanley was born on July 12, 1931 at his family home in rule Brookfield, MO; the son of Edward Thomas and Lillian Alta (Williams) Brown. He was married to Dixie Bowyer and to this union, his two daughters were born. Stanley was a 1949 graduate of Brookfield High School. After graduation, Stanley joined the United States Navy and bravely served during the Korean Conflict on the USS Hornet. During his time in the service, he visited Hong Kong, Saipan, and Japan. Stanley had a passion for tending to God’s country and dedicated much of his life to farming and raising Black Angus cattle. He began carrying mail for the United States Postal Service and worked diligently for many years until he retired as Post Master. Stanley was a man of great faith and a member of First Baptist Church in Jefferson City as well as a prior member and Deacon of Park Baptist Church in Brookfield, Missouri. He stayed very involved in the church and their activities including teaching preschool and 5th grade boy’s Sunday School and volunteering to clean dishes and do various jobs at church events. Stanley was a quiet man. He had a servant’s heart and a very gentle and humble soul. Stanley demonstrated Agape Love (God’s love), truly unconditional. To know Stanley was to love him. He lived life with perseverance and endurance, never stopping until the job was done. That work ethic was a trait he instilled deeply in his children. Stanley was handy and believed in using what he had available to him. He could repurpose anything to something of value. Stanley loved his family and cherished the time spent and memories made with his grandchildren and great-grandchildren. His life truly revolved around them and his favorite role was being GRAND PA! He could often be found playing Pretty Pretty Princess and other games with them. Stanley made sure they had everything they could ever dream of including a homemade seesaw, beautifully painted bicycles, and even a pony. Spending quality time and teaching them life lessons was important to him and will forever be remembered with fondness by his family. Stanley was a fan of the St. Louis Cardinals and rarely missed watching a game. He even kept his own book of statistics and record keeping. Stanley will be remembered for always being the “constant” of his family, serving as a confidant for his daughters and setting an admirable example of the power of faith. Survivors include: two daughters, Sandra Hemphill(husband, Gary) of Jefferson City, MO; and Sheree Starrett (husband, David) of Overland Park, KS; his grandchildren, Emily Smith (husband, Cameron), Ashley Hemphill, and Alexandra Hemphill; two great-grandchildren, Walker and Caroline Smith; and one niece, Dixie Jean Pecsi. Stanley was preceded in death by his parents; and one sister, Helen Wilson. Visitation will be held from 3:00 p.m. until 4:00 p.m. on Friday, January 7, 2022 at Freeman Mortuary in Jefferson City, MO. A Celebration of Life will immediately follow at 4:00 p.m. in the Freeman Chapel. Funeral arrangements and services in Jefferson City, MO; are under the direction of Freeman Mortuary, Jefferson City, MO. A webcast of the service in Jefferson City, MO; will begin at 4:00 p.m. Friday for the friends that are not able to attend by going to his memorial page on Freeman website. Friends may mail sympathy card to the funeral home or leave condolences online to be given to his family. An additional visitation will be held from 10:30 a.m. until 11:00 a.m. Saturday, January 8, 2022 at Rhodes Funeral Home in Brookfield, MO. with a Celebration of Life service to follow at 11:00 a.m. at Rhodes Funeral Home, with Pastor David Blakely officiating. Graveside services and internment will follow at Parklawn Memorial Gardens Cemetery in Brookfield, MO. Funeral services in Brookfield, MO; are under the direction of the Rhodes Funeral Home, Brookfield, MO. Online condolences may be made at www.rhodesfh.com In lieu of flowers, memorial contributions are suggested to The Gideon’s International.

The family of Stanley Varvel Brown created this Life Tributes page to make it easy to share your memories.