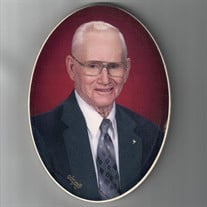 Victor Eugene Speichinger, 88 of Brookfield, MO. passed away Thursday, January 6, 2022 at his home with his family by his side. A Catholic Funeral Mass will be held Tuesday, January 11, 2022 beginning at 11:00 am. at the Immaculate Conception Church, Brookfield, MO. with Father Jerry Kainman and Father Kelechi Uzuegbu officiating. Burial will follow at St. Michaels Cemetery, Brookfield, MO. with Full Military Honors provided by the Brookfield VFW Post # 4557. Visitation will be held Monday, January 10, 2022 at the Immaculate Conception Church, with Rosary begin at 5:30 pm. then with family receiving friends from 6:00 pm. to 8:00 pm. Memorial contributions can be made to the St. Michaels Cemetery and SEV (Saving Every Victim) and can be left at or mailed to the Rhodes Funeral Home, 216 Linn Street, Brookfield, MO. 64628. Online condolences can be made at www.rhodesfh.com Services are under the direction of the Rhodes Funeral Home, Brookfield, MO. Victor Eugene son of Otto Leo Speichinger and Estella Gertrude Thralls Speichinger was born on March 8, 1933 in Mendon, MO. On August 11, 1956 he was united in marriage to Helen Stephens at the Holy Catholic Church in Centralia, MO. Helen preceded him in death on February 28, 1992. Then on May 27, 1995 in Brookfield, MO. he married Donna McCauslin. Donna preceded him in death on February 5, 2016. Victor was a member if the Immaculate Conception Church in Brookfield and was a member of the Knights of Columbus for 55 years. He served for 33 years as a board member for the Brookfield Rural Fire Association, a longtime member of the MFA Oil Company and the MFA Agri Service, and a member of the Old Couples Club. Victor farmed most of his life raising cattle and row cropped. He enjoyed driving around checking out other farms and going to farm auctions. Victor love family gatherings and spending time with his family whether it was playing cards or a game of pig/horse. Victor is survived by his eight children, Lawrence Speichinger and wife Kathy, Vickie Redick, Mary Turpin and husband Jack, Janie Spencer and husband Floyd, Mark Speichinger and wife Sherry, Tim Speichinger and wife Cathi, Kathy Seckington and husband Bret, and Brent Speichinger and wife Mollee, one daughter in-law, Teresa Speichinger, four step children, Debra McCauslin, DeWayne McCaulin and wife Janet, Mark McCauslin and wife Sidna, and Dena Lundquist and husband Guy, twenty seven grandchildren, 48 great grandchildren, one great-great grandchild, six step grandchildren, twelve step great grandchildren, and several nieces and nephews. He is preceded in death by his parents, two wives’, Helen Speichinger and Donna Speichinger, two sons Scott Aaron Speichinger and Stephen Victor Speichinger, and two sons-laws Francis Watson and Dan Redick.

Victor Eugene Speichinger, 88 of Brookfield, MO. passed away Thursday, January 6, 2022 at his home with his family by his side. A Catholic Funeral Mass will be held Tuesday, January 11, 2022 beginning at 11:00 am. at the Immaculate... View Obituary & Service Information

The family of Victor Eugene Speichinger created this Life Tributes page to make it easy to share your memories.