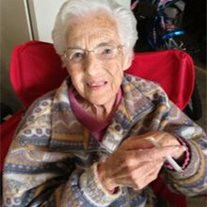 Anna C. Dooley, age 87 of O Fallon, formerly of Brookfield died Thursday October 01, 2015. Graveside funeral services will be held at 2:30 pm Monday October 05, 2015 at Parklawn Memorial Gardens Cemetery, Brookfield with Reverend Mike White officiating. Visitation will begin at 12:00 pm Monday October 05, 2015 at Rhodes Funeral Home with family receiving friends from 1:00 pm until 2:00 pm. Memorials have been suggested to The American Cancer Society and may be left at or sent to the funeral home, 216 Linn Street, Brookfield, Missouri 64628. On-line registry at www.rhodesfh.com Anna Caroline was born in Kansas City, Kansas the daughter of Robert E. and Eva Jane Hargitt Hamilton. She graduated from Wyandotte High School and attended Burroughs Business College and worked as an Auditor for Katz Drug Company for many years. She married Kenneth Dooley on March 15, 1963. On September 1969 they moved to Brookfield and purchased Brookfield Floral and operated it for a number of years. Kenneth passed away on November 5, 1977. Anna continued to operate the business until her retirement in February 1992. In 2012 she moved in with her nephew Bill and his wife Missy. She is survived by her nephew William (Bill) Bonsack and wife Missy, who was Anna's caretaker, O Fallon; nieces, Jane Walz and husband Mark and Margaret McIntosh and husband Doug of St. Louis; great-nieces and nephews, Cate, Sam, Alex, Olivia, Lucy, Katie, Robert, Dani, Lauren, Sarah, William and Marie; longtime friend, Ann Boone and her children, Matt Boley and wife Candice, Adam Boley and wife Erin, to whom Anna was like a mother and grandmother. Anna was preceded in death by her parents; her husband and a sister, Marie Bonsack.

The family of Anna Caroline Dooley created this Life Tributes page to make it easy to share your memories.