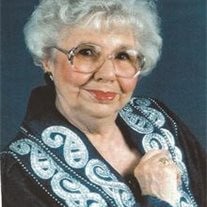 Arlene Ruth Waggett Judas, daughter of Fred and Minnie (Thieking) Waggett, departed this life in her home, on October 30, 2012 at the age of 89. Arlene was born January 22, 1923 in Waverly, Iowa and was baptized the following September and later confirmed at St. Paul's Lutheran Church. By age 2 she had won numerous baby contests and continued to radiate that beauty inside and out using her lovely voice along the way. On July 7, 1938 Arlene married Elster (Red) Judas in the Little Brown Church at Nashua, Iowa and they shared 39 years together until his sudden death in 1978. Three (3) children; Sharon (Judas) Atha, Dennis Judas, and Lois (Judas, Shiflett) Stone were created from this marriage. Arlene also had many loving grandchildren whom she truly enjoyed spending time with; Brian, Steve, Mark Atha, Jackie (Atha) Thompson, Kellie (Atha) Techau, Kevin and Dena Judas, Dawn, Brent and Chad Shiflett. Arlene had 14 great-grandchildren; Brandi and Brooke Atha, Felicia Atha, Bobbi and Ronea Atha, Jason, James and Jeramy Thompson, Cassandra and Amelia Atha, and Jamie Techau, Brandon and Christina Judas, and Dylan Shiflett. Arlene had 15 great-great-grandchildren and a host of other relatives and many treasured friends who will cherish her memory. Arlene was preceded in death by her parents Fred and Minnie Waggett, her husband Elster, her son Dennis; 2 granddaughters, Dawn Shiflett and infant Dena Judas; a great-great-granddaughter, Lena Techau; a special sister-in-law, Norma (Judas) Sommer; and several cousins. In 1953 Elster (Red) and Arlene moved from Northwood, Iowa where they had owned and operated a bar and grill for 5 years to a farm in New Boston. They were honored as Balanced Farming Family of the year in 1959, and became charter members of the Charolaise Cattle Association in 1963. Arlene was a member of Macon County Agricultural Extension Council, and secretary of the Ethel Rhythm Riders Saddle Club. Following her husband's death, Arlene moved to Kansas City and began training for The Jones Store and received the Teamwork Award in 1986. Due to her love of travel, during these years she made trips to Paris, England, Ireland, Mexico and many states visiting family and friends. After retiring to Brookfield, Arlene became involved in AARP receiving several service awards. She was a member of Trinity United Methodist Church. Arlene expanded her lifelong writing of beautiful spiritual poetry, became the family's skilled seamstress and developed various crafts which she shared with friends, family, church, retirement homes and anyone needy. These creations included angels, Easter eggs, button pins, milkweed pods, buttons of blessings and many others. All of Arlene's unique items were enhanced by her intelligent mind and creative flair. We were so fortunate that she was part of our lives for so long and we will treasure our wonderful memories of a Christian gentle woman who possessed an undeniable presence, who was the rock for us all, and who was always the true essence of a lady. She will be missed beyond words. The family invites you to a celebration of Arlene's life at 2:00 pm Friday November 2, 2012 at Rhodes Funeral Home with Reverend Mike White officiating. Burial will be in Pleasant Grove Cemetery, New Boston. Visitation will begin at noon Friday with family receiving friends from 1:00 pm until time of service. Memorial donations may be made to St. Jude Children's Research Hospital or VFW Post 4557 and may be left at or mailed to the funeral home, 216 Linn, Brookfield, Missouri 64628.

Arlene Ruth Waggett Judas, daughter of Fred and Minnie (Thieking) Waggett, departed this life in her home, on October 30, 2012 at the age of 89. Arlene was born January 22, 1923 in Waverly, Iowa and was baptized the following September and... View Obituary & Service Information

The family of Arlene Ruth Judas created this Life Tributes page to make it easy to share your memories.