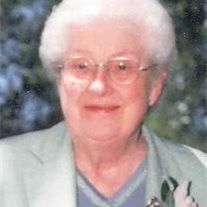 The following obituary has been submitted by the family: Augusta Sheen Cattey, age 90 of Brookfield, died from natural causes, Wednesday, January 01, 2014 at Heartland Regional Medical Center in St. Joseph after a fall earlier in the week. She was born August 11, 1923 south of Brookfield, Missouri to Clarence and Theresa (Tillman) Sheen. She graduated from Brookfield High School. She began her career as a bookkeeper for the former Brookfield Chickeries. On June 11, 1954 she married Nelson L. Cattey in Brookfield. Together they owned and operated Cattey Feed and Seed until 1993. They also raised Certified Black Angus Cattle on their farm, N A Angus until 2003. Nelson died December 27, 2010 in Brookfield. Augusta was a lifelong member of the Immaculate Conception Church of Brookfield. She was active with her family in county 4-H activities where she was the Happy-Go-Lucky Club Leader. She was active in County Fairs and State Fairs. In the fall of 2005 she and Nelson were inducted into the Missouri 4-H Hall of Fame. She was a member of the Missouri Angus Association; a former member of the Missouri Cow Bells; life member American Angus Association; Gamma Omicron Chapter of Beta Sigma Phi Social Sorority and the Catholic Units Bridge Club. Augusta was an amazing mother, grandmother and mother-in-law. She greatly enjoyed feeding those around her table with the produce from her garden. She remained independent and enjoyed discussing current events with those she visited. She was also preceded in death by her brothers, infant Bernard Sheen and Robert Sheen and her sister, Dorothy Jones. Augusta is survived by her son, James B. Cattey and his wife, Joan of Olathe, Kansas; her daughter, Doris L. Montegna and her husband, Eric of St. Joseph, Missouri; three grandsons, Samuel D. Cattey, Aaron M. Cattey and Arthur B. Cattey all of Kansas City; her brother, Edwin Sheen and his wife Shirley of West Richland, Washington, her brother, John Sheen and his wife Zelda of Downs, Illinois and her sister, JoAnn Witte of Yorkville, Illinois and numerous nieces, nephews, cousins and extended family members. Mass of Christian Burial 10:00 am Monday January 6, 2014 Immaculate Conception Church, 313 North Livingston, Brookfield, Missouri with Father Jerry Kaiman officiating. Interment will be in St. Michael's Cemetery, Brookfield. Prayer Service will be at 5:30 pm Sunday January 5, 2014 at Rhodes Funeral Home. The family will receive friends from 6:00 pm – 8:00 pm Sunday, where friends may call after 12:00 pm. The family suggests memorial gifts to the Immaculate Conception Church Window Fund or Linn County 4-H and may be left at or sent to the funeral home, 216 Linn Street, Brookfield, Missouri 64628. On-line condolences forwarded to www.rhodesfh.com

The following obituary has been submitted by the family: Augusta Sheen Cattey, age 90 of Brookfield, died from natural causes, Wednesday, January 01, 2014 at Heartland Regional Medical Center in St. Joseph after a fall earlier in the week. She... View Obituary & Service Information

The family of Augusta Cattey created this Life Tributes page to make it easy to share your memories.

The following obituary has been submitted by the family: