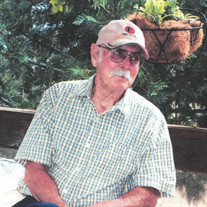 Curtis Leroy Rogers, age 86, of Coarsegold, California, passed away Saturday, February 29, 2020, after an extensive illness. A private family interment will be held with full military honors at a later date. Services are under the direction of Rhodes Funeral Home. Online registry at www.rhodesfh.com. Curtis was born on May 30, 1933 in Bucklin, Missouri to Charles A. and Lorrayne Lucille (York) Rogers. The family moved to Anaheim, California where Curtis graduated high school and later married. He then moved to Monticello, Kentucky and enlisted in the United States Air Force at Chanute Air Force Base in Illinois on March 13, 1953. He served his country for eight years; two and a half of those years were spent in Japan as an aircraft electric accessories repairman. He was awarded the National Defense Service Medal and the Good Conduct Medal upon his discharge on February 28, 1961. Curtis worked the next twenty four years as a manufacturing engineer for Boeing Air Craft, retiring in 1985. Curtis moved to Coarsegold, California where he worked as grounds keeper and handy man in the community camp grounds. He enjoyed traveling and camping. Curtis didn’t know a stranger and would help anyone in need. He worked with the Hospice Organization for several years. He was a compassionate man and even though he is gone he will not be forgotten. Survivors include his wife, Vivian, of the home; his daughter, Sue Rogers, Browning, MO; one granddaughter, Kathy Purvis (Eric), Clio, IA; and two great grandchildren, Teresa and Isaac. Curtis was preceded in death by his parents, his son Michael Rogers, two brothers and two sisters.

Curtis Leroy Rogers, age 86, of Coarsegold, California, passed away Saturday, February 29, 2020, after an extensive illness. A private family interment will be held with full military honors at a later date. Services are under the direction... View Obituary & Service Information

The family of Curtis Leroy Rogers created this Life Tributes page to make it easy to share your memories.