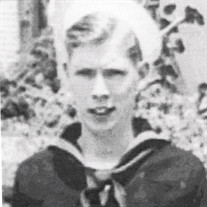 United State Navy Sailor George Merton Gooch, age 22 from Laclede, Missouri; was killed in action during World War II on the Battleship USS Oklahoma when the Japanese attached Pearl Harbor on December 7, 1941. At that time George was declared dead while missing in action or lost at sea. His remains were identified on September 14, 2020. At 1:00 pm. Saturday, October 9, 2021, George Gooch will laid- to- rest in the Laclede Cemetery in Laclede, Missouri with Full Navy Military Funeral Honors conducted by the United States Navy. Services are under the direction of the Rhodes Funeral Home, Brookfield, MO. George Merton Gooch was born to Linn Gooch and Hulda Mae Alexander Gooch on April 23, 1919 in Purdin, Missouri. George was a 1937 graduate from the Laclede High School. He had six other siblings, Hermia Vasiel Gooch Malloy, Reba Lucille Gooch Peters, Wallace Linn Gooch, Alexander Jenkins Gooch, PVT Eugene Clark Gooch, and Eunice Fern Gooch Catlin. In 1939 he joined the United States Navy. At about 7:48 am December 7, 1941 the Imperial Japanese Navy Air Service conducted a surprise military strike against the United States at the naval base in Pearl Harbor, Hawaii. The battleship USS Oklahoma was one of the first ships to be attacked. The ship was torpedoed and was capsized. Gooch was killed during the attack. At the time of his death, George was awarded the Purple Heart and was ranked Petty Officer Third Class and his specialty was Electrician’s Mate Third Class. In 2015; the Department of Defense and the Defense POW/MIA accounting agency initiated a program to identify the unidentified sailors from the Battleship USS Oklahoma by match their DNA against the DNA of family members. Through these methods, George Merton Gooch was identified.

The family of George Merton Gooch created this Life Tributes page to make it easy to share your memories.