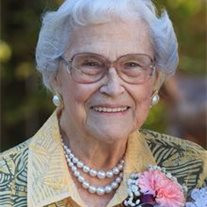 HURLA JEAN (RAW) SPRAGUE Hurla Sprague, 85, of Brookfield, died on July 9, 2016, in Columbia, MO, surrounded by family, after an extended battle with cancer—her third. She had been staying at the home of her eldest child, Debbie Jones, since the first of the year. Mom maintained her sharp mind and mobility throughout this ordeal and was active in her own care until the end. Services will be held on Thursday, July 14, at 2 p.m. in the Park Baptist Church Sanctuary with the Rev. David Blakely officiating. Burial at Parklawn Memorial Cemetery will follow. Visitation will be held from 12-2 p.m. in the sanctuary with family present at 12:30 p.m. The daughter of Hurley and Cora Raw, Hurla was born on December 3, 1930, in Marceline, Missouri. Her maternal grandfather was the late Judge David Green Cupp of Marceline. Hurla was a MHS cheerleader, the Editor of Tiger Tales, a member of the National Honor Society and the Dramatics Club, and the Valedictorian of her graduating class. She also served as President of Home Room, Class Secretary, and as part of the Marcello Staff, and participated in the Jr. and Sr. Class Plays. Hurla married Lawrence Sprague January 23, 1949 and the couple had four children—Debra, Cara, Mark, and David. The couple were married for 63 yrs. Hurla was a proud member of Park Baptist Church, where she served as Girls' Auxiliary leader for eight yrs., Church Clerk for 12 yrs., Church Treasurer for 12 yrs., and adult women's Sunday School teacher for 55 yrs. She was a member of WMU since 1955 and served on numerous church committees. She was consulted for her Biblical knowledge and admired for her commitment to the faith. Hurla was employed for 26 yrs. as Township Tax Collector in Brookfield. She would never have retired (at age 75), she has said, had she not developed vision problems. During her tenure at the tax office, many an elderly person got their tax bill paid by Mom if she saw they were in need. Prior to serving as tax collector, Hurla worked for 14 yrs., beginning in 1965, for Brookfield R-3, where she was hired as an aide to Walter Dinwiddie, head of the BHS Science Dept. She later worked as a paraprofessional at BHS, while raising her family. She is survived by her children Debra (& John) Jones, Columbia, MO, Cara (& Dr. Kenneth) Alfieri, Overland Park, KS, Mark (& Debby) Sprague, Lincoln, NE, and David (& Ann) Sprague, Moberly, MO; five grandchildren, Jami (& Jed) Spaulding, Nathan Sprague, Kristi (& Tom) Roddel, Eric (& Nikki) Sprague, and Hannah (& Tyler) Walker; and ten great-grandchildren, Katie and Jakob Jones, Grace, Libbi, and Hope Spaulding, Luke, Kylie, and Madelyn Roddel, and Alexiana and Bentley Sprague. She was preceded in death by her husband, Lawrence; her eldest grandchild, Brent Robinson Jones; her parents; a sister, Willa Dean; and brother, Clarence Edward. She was an exceptionally independent spirit who leaves an admirable example of perserverance, character, and determination for her family and friends. The family requests that memorial gifts be made to the Park Baptist Church. They may be left with or mailed to Rhodes Funeral Home, 216 Linn St., Brookfield, MO 64628.

HURLA JEAN (RAW) SPRAGUE Hurla Sprague, 85, of Brookfield, died on July 9, 2016, in Columbia, MO, surrounded by family, after an extended battle with cancer&#8212;her third. She had been staying at the home of her eldest child, Debbie Jones,... View Obituary & Service Information

The family of Hurla Jean Sprague created this Life Tributes page to make it easy to share your memories.