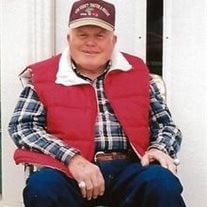 Jack Roger Moore, age 81, passed away peacefully at Pershing Memorial Hospital on October 10, 2012, surrounded by his family. Jack was born on April 3, 1931 to Lee and Lula B. Rogers Moore at St. Joseph, Mo. He graduated from Laclede High School in 1949 and a few short months later, he was united in marriage to his childhood sweetheart, Betty Chalfant on August 19, 1949. Jack and his dad, Lee, established Moore Implement Company in 1949 in Laclede, Mo. The business began as a Massey-Harris dealership which later became a Massey-Ferguson dealership. Jack went on to work for Bess Implement of Brookfield and sold International Harvester equipment as well as Allis Chalmers equipment for Hahn Implement, also of Brookfield. He embarked solely on his own in 1970 primarily as a used equipment dealer, but he also employed in new equipment for various short line equipment manufacturers. Jack's business, though small in appearance, sold equipment to customers in nearly every state. In addition, Jack had the opportunity to assist buyers in Canada, Mexico and Central America. He counted business relationships with Disneyland and Kansas State University School of Agriculture. Jacks knowledge of the farm machinery industry was unmatched. He was known throughout North Missouri as an honorable business owner, who loved his trade and enjoyed the opportunity to teach others about the equipment he sold. He regularly attended area livestock and farm implement auctions and was frequently approached by those who sought out his opinion and advice. Jack is survived by his wife of 63 years, Betty Moore; two daughters, Joy Turner and husband Charlie of Lebanon, Mo; Diane Hatch and husband Curt of Springfield, Mo; one son, Roger Moore and wife Pam of Blue Springs, Mo; a sister, Bea Stanley, Brookfield, Mo; four grandchildren, four great-grandchildren; two nieces; one nephew and numerous extended family and friends. He is preceded in death by his parents and a brother-in-law. Visitation will be held on Sunday October 14, 2012 from 9:00 am - noon, with family receiving friends from noon - 1:30 pm at the funeral home. Graveside services will follow at 2:00 pm in the Laclede Cemetery. The family would like to thank the entire nursing staff and hospital personnel at Pershing for their professional and amazing compassionate care to our husband, dad, and grandfather during these difficult months.

Jack Roger Moore, age 81, passed away peacefully at Pershing Memorial Hospital on October 10, 2012, surrounded by his family. Jack was born on April 3, 1931 to Lee and Lula B. Rogers Moore at St. Joseph, Mo. He graduated from Laclede High School... View Obituary & Service Information

The family of Jack Roger Moore created this Life Tributes page to make it easy to share your memories.