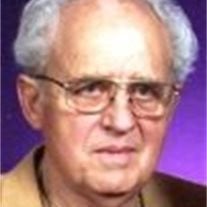 Mr. Jerome N. Shupe age 83 of Galesburg, IL. died Saturday December 29, 2012 at 4:55 pm at Seminary Manor Nursing Home. He was born December 11, 1929 in Brookfield, the son of Norton H. and Mary Martha Newkirk Shupe. He married Betty L. Mordecai on May 6, 1951 in Brookfield. She preceded him in death on February 22, 2008. Jerome is survived by one son, Stephen J. and Geneva Shupe of Poplar Bluff; two daughters, Kathey and Rick Helton of Knoxville, IL. And Becky and Rick Wigington of Clemmons, N.C.; a nephew, Roger Frakes, Albuquerque, N.M.; a granddaughter, Stacey and Matthew Peavy, of Vienna, Ga., whom he and Betty raised; one brother, Orville and Carol Shupe, of Rossville, Ga.; one sister, Juanita and John Goldman, of Clovis, N.M.; ten grandchildren, and seventeen great-grandchildren, and one great-great-granddaughter. He graduated from Brookfield High School in 1947. He was an engineer for CB & Q and Burlington Northern Railroads for 41 years retiring in 1992. He was a member of the Galesburg Parkview 7th Day Adventist Church. He had many hobbies, the main one was working. He enjoyed woodworking, his hobby houses (rental property) but his main focus was family. Traveling to each home which he deemed the most important thing he could do since his retirement having nothing but time to share with those he loved. He was a very giving person to those that knew him as he never met a stranger. He was quick to share his beliefs, wisdom and commitments. He was loved by all that knew him and was the greatest "Dad" and "PaPa" ever. Funeral services will be 1:30 pm Thursday January 3, 2013 at Rhodes Funeral Home with Pastor Mike Carner officiating. Family visitation will begin at 12:00 pm Thursday January 3, 2013 until time of service. Burial will be in Parklawn Memorial Cemetery, Brookfield. Memorials may be made to the Galesburg Parkview 7th Day Adventist Church or to the Charity of the donor's choice and may be left at or sent to the funeral home, 216 Linn Street, Brookfield, Missouri 64628. Acknowledgements to be sent to Kathey Helton at 105 West North Street, Knoxville, IL. 61448.

The family of Mr. Jerome N. Shupe created this Life Tributes page to make it easy to share your memories.