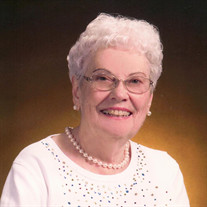 Jerry Davolt, age 97, of Lee’s Summit, Missouri, formerly of Bucklin, Missouri, passed away Friday, October 29, 2021 at Wilshire at Lakewood Care Center of Lee’s Summit, Lee’s Summit, Missouri Jerry daughter of Commodore Davis and Flossie Maud Jackson was born on February 2, 1924 in New Boston, Missouri; but grew up in St. Catharine. On August 1, 1942 she was united in marriage to Johnnie Russell Davolt in Marceline, Missouri. He preceded her in death on January 17, 2015. Jerry was a lifelong member of the Bucklin United Methodist Church, a 50 plus year member of the Bucklin American Legion Auxiliary, and several other organizations and clubs. She kept busy organizing and supervising the different organizations she was in and enjoyed doing it. Jerry and her mother Flossie ran and owned the Davis Café in Bucklin for about 23 years until it closed in the early 1970’s. She then worked and was the assistant vice president for the Bucklin State Bank in Bucklin until it closed. Later she worked a long side her son Roger, at his business, Rogers TV and Radio Shack until she retired. Jerry loved to dance, liked to visit with people, and most of all loved her family. Survivors include her daughter, Judy Kay Nichols and husband Ronnie of Lee’sSummit, MO; and son Roger Davolt and wife Gloria of Trimble, MO; four grandchildren, Shauna Gauthier, Amber McCourt, Amanda Sullivan, and Michael Scott Nichols; eight great-grandchildren, Bobbi Jo Gauthier, Bobby Lee Gauthier, Jesse Gauthier, Johnnie Gauthier, Christian Kaczmarek, Adelyn McCourt, Evie Sullivan, and Emerson Sullivan; and seven great great-grandchildren. She was preceded in death by her parents, husband, two brothers, Denzel Davis and Ottis Davis, two sisters, Verbena Lacer and Lucille Anderson, and two grandsons, James Jimmy Overstreet and Johnny Russell Overstreet. Funeral Service will be held at the Bucklin United Methodist Church, Bucklin, Missouri, on Wednesday, November 3, 2021 at 11:00 am. with Pastor Meghan Riegerix officiating. Burial will be in the Bucklin Masonic Cemetery, Bucklin, Missouri. Visitation will begin at 10:00 am. Wednesday, November 3, 2021 at the Bucklin United Methodist Church, Bucklin, Missouri with family receiving friends until the time of the service. Services are under the direction of the Rhodes Funeral Home. Brookfield, Missouri. Memorial contributions may be made to the Bucklin United Methodist Church and/or the Bucklin American Legion Post #57 and can be left at or mailed to the Rhodes Funeral Home, 216 Linn Street, Brookfield, MO. 64628. Online condolences can be made to www.rhodesfh.com

The family of Jerry Vella Geraldine Davolt created this Life Tributes page to make it easy to share your memories.