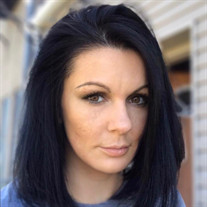 Jessica Rozanne Polson February 2, 1982-August 2, 2021—mother, niece, granddaughter, daughter, sibling, cousin, and friend lost her hard-fought battle with mental illness at 39 years old. Jessica was always known for her courage in hard times, for seeing the sunshine on the darkest day, and for having something positive to say for anyone else that might also be struggling. Unfortunately, her own darkness was too much to handle and she died by suicide at her home in Macon, Missouri. Jessica was an old hippie soul, happiest playing in the dirt with her plants and finding a sweet haul of cool rocks while using a walking stick she found along the way. Jessica loved music and loved to reminisce about going to concerts and on adventures with her Aunt Cathy. Whatever Jessica’s hobbies and passions were in that moment, she knew the subject from top to bottom soaking in all of the information she could find. She put no less than 110% into whatever she was doing at the time. She was the master at DIY projects, home renovations, and had all of the life hacks anyone would ever need to make things easier; she definitely wanted to work smarter not harder. The two people that Jessica loved the most on this entire earth are her daughters Lyric and Scarlet. They brought so much joy to her life. Her smile would light up the room while talking about them, whether it was Lyric’s artistic abilities or Scarlet’s grades. She thought they were the most beautiful people ever made and there wasn’t a single thing she wouldn’t give up to see them happy. Jessica would want you all to move forward with these thoughts: Love the people in your life. Be present. Ask the hard questions. Express your love in the moment, and often. Don’t love someone to death from a far, waiting to show up for them when it’s too late. Jessica is survived by her daughters Lyric and Scarlet Polson, father to her girls, Kenneth Polson, Lyric and Scarlet’s grandma and grandpa Vicky and Doug Gardner, her Aunt Cathy (Nicole) Jacobs, grandmother Ruby Jacobs, her mother and father Donna and Bruce Vickery, her father Ron Davis, siblings Josh Vickery, Holly McCracken, Frankie Vickery, Samantha Vickery, Hannah Scott, Zachariah Vickery, Elijah Vickery, Isabella Vickery, Olivia Vickery, Abraham Vickery, and many nieces, nephews, cousins, and friends. Jessica is preceded in death by her grandpas Ronnie Jacobs and Gene Wade and grandparents Leo and Joy Vickery. The family will be receiving friends from 1-3pm at the Rhodes Funeral Home in Brookfield, Missouri on Saturday August 7, 2021. There will be no scheduled funeral service. In lieu of flowers, memorial donations may be made to the family and may be left at or mailed to the Rhodes Funeral Home at 216 Linn St in Brookfield, MO 64628. Online condolences may be left at www.rhodesfh.com

The family of Jessica Polson created this Life Tributes page to make it easy to share your memories.