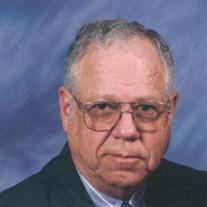 Paul Martin Spencer, 89 of Brookfield, passed away Thursday, May 20, 2021 at his home in Brookfield, MO; with family by his side. Funeral Services will be at 1:00 pm. Friday, May 28, 2021 at the Missouri State Veterans Cemetery, Jacksonville, MO; with Pastor Mandy Tarpening officiating with Inurnment to follow. Services are under the direction of the Rhodes Funeral Home, Brookfield In lieu of flowers memorial donations have been suggested to the First Christian Church of Brookfield and can be left at or mailed to the Rhodes Funeral Home, 216 Linn Street, Brookfield, MO. 64628. Online condolences can be made at www.rhodesfh.com Paul Martin son of Floyd A. Spencer and Nellie Irene Martin Spencer was born on August 13, 1931 in Brookfield, MO. He married Nadine Newsom on May 2, 1960 in Cave-In-Rock, IL. Paul served our country in both the United States Navy and the United States Army. He was a member of the Frist Christian Church of Brookfield. Paul loved spending time with his grandkids and great-grandkids. He is survived by his wife Nadine of the home; two daughters, Debbie Hoyt and husband Terry of Brookfield, MO; and Beth Curley and husband Duane of Laclede, MO; one son Floyd Spencer and wife Janie of Laclede, MO; six grandchildren, Angela Murrell and husband Bruce, Eric Hoyt and wife Mary, Daniel Hoyt and wife Amber, Martin Curley and wife Gretchen, Marc Spencer and wife Stephanie, and Alex Spencer; thirteen great-grandchildren, and several nieces and nephews. Paul was preceded in death by his parents, two sister, and two brothers.

Paul Martin Spencer, 89 of Brookfield, passed away Thursday, May 20, 2021 at his home in Brookfield, MO; with family by his side. Funeral Services will be at 1:00 pm. Friday, May 28, 2021 at the Missouri State Veterans Cemetery, Jacksonville,... View Obituary & Service Information

The family of Paul Martin Spencer created this Life Tributes page to make it easy to share your memories.