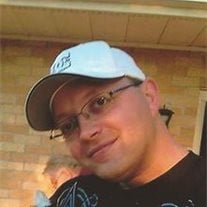 PHILLIP M. WRIGHT Phillip Michael Wright, 30 of Brookfield, passed away Saturday, March 23, 2013 at his home. Visitation will be held Tuesday, March 26 beginning at 2:00 p.m. with family present from 6 to 8 pm at Rhodes Funeral Home. Funeral services will be held Wednesday, March 27 at 2:00 p.m. at the funeral home with Pastor Ron Adrian officiating. Burial will follow at Rose Hill Cemetery. The family has suggested memorials in Phillip's name to his daughter, Kaleena Wright and may be left at or mailed to the funeral home at 216 Linn Street, Brookfield, MO 64628. On line condolences may be left at www.rhodesfh.com. Phillip Michael Wright was born January 21, 1983 in Marceline, Missouri, the son of Michael Eugene and Cheryl Suzanne Gash Wright. He enjoyed visiting with people and truly had the gift of gab. Phillip was a perfectionist and always made sure his clothes, shoes and hats matched before he went out. He loved shopping, listening to music and being around people. He was a hog farmer for PSF. Phillip is survived by his mother, Cheryl (Robbie) Williams of Brookfield, father, Mike (Debbie) Wright of Trenton, daughter, Kaleena Wright of Brookfield, fiancé, Jamie Nunley and her children, brother, Greg (Jennifer) Wright of Trenton, sister, Kristin Cagle of Brookfield, step-brother, Robert Williams of Brookfield, step-sister, Ila Woolsey of Springfield, step-brother, Chris Baker of Shawnee Mission, KS, and step-sister, Tiffany Owen of Trenton. Also surviving are his grandmothers: Shirley Gash of Brookfield and Karen Stauffer of Smithville and step-grandmother, Susan Wright of Marceline as well as numerous other relatives. He was preceded in death by his sister, Leslie Marie Wright, grandfathers, Charles Vernon Gash and Taylor Wright and step-grandfather, Bill Stauffer.

The family of Phillip M. Wright created this Life Tributes page to make it easy to share your memories.