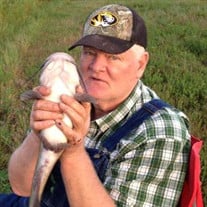 Wayne Edward Clarkson, age 70, of Marceline, passed away Thursday, November 29, 2018, at Pioneer Skilled Nursing Center, Marceline, Missouri. A funeral service with full military honors will be held at 1:00 PM, Wednesday, December 5, 2018, at Freedom Baptist Church, with Pastor Kevin Pulliam and Pastor Ron Adrian officiating. Burial will follow in Lakeside Cemetery, Sumner, MO. A visitation will be held on Wednesday, December 5, 2018, from 12:00 PM until the time of service. Memorials have been suggested to the Freedom Baptist Church Benevolent Fund, and may be sent to or left at Rhodes Funeral Home, 216 Linn Street, Brookfield, MO 64628. Online registry at www.rhodesfh.com. Wayne Edward, the son of Vernon Leroy Clarkson and Pauline Alberta (Downey) Clarkson, was born on March 21, 1948 in Marceline, Missouri. Wayne served his country in The United States Army from 1968-1970. He spent many years working at Dura Automotive and was active in the Freedom Baptist Church Homeless Mission. In his spare time he enjoyed being outdoors and fishing with his friends. Wayne is survived by his best friend, Sheena Lane and her children, Jimmie Lane, Charla Lane and Jackie Lane; as well as many of his church friends. He was preceded in death by his parents, and one uncle, Charles Pete Downey.

The family of Wayne Edward Clarkson created this Life Tributes page to make it easy to share your memories.