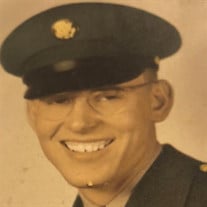 William Charles Davis, age 80, of Independence, passed away Wednesday, February 5, 2020, at St. Luke’s East Hospital, Lee’s Summit, Missouri Funeral services will be held at 12:00 PM on Monday, February 10, 2020 at Rhodes Funeral Home, Brookfield, Missouri with Reverend Don Hoffman officiating. Burial with full military honors will follow at Park Lawn Memorial Gardens Cemetery, Brookfield. A visitation will be held from 11:00 AM to 12:00 PM on Monday, February 10, 2020 at Rhodes Funeral Home, Brookfield, Missouri. Memorials have been suggested to the family, in care of Sherry Davis, to be split among Bill’s favorite causes, and may be left at or sent to Rhodes Funeral Home, 216 Linn Street, Brookfield, MO 64628. Online registry at www.rhodesfh.com. William Charles, son of Gail Ralston Davis, and Dorothy Lucille (Creason) Davis, was born on May 8, 1939 in Browning, Missouri. Bill served his county in the United States Army from 1958-1961 and he was a long time member of the American Legion. Bill worked as a manager for the Ford Motor Company for 34 years until his retirement in 1995; he and his family were very proud of his accomplishments while working there. Bill was a family man and loved nothing more than to spend his time with them. He was avid sports fan, his TV habits included watching any type of sport he could find and if he wasn’t watching he was reading a book by his favorite novelist John Grisham. He loved spending time at the lake; one of his favorite things was relaxing on his deck at his home on Pomme de Terre lake. He was a man of strong conviction and could always be counted on to be there to support his loved ones in their time of need. Bill is survived by his two children, Sherry Davis Shively (Jeff), Liberty, MO; Susan Davis, Independence, MO; three grandchildren, Tyler Davis, Will Davis, and Ryan Shively; two brothers, James F. Davis (Sherrie), St. Charles, IL; and David Davis (Gail), Laclede, MO; as well as many other family members and friends. He was preceded in death by his parents; two sisters, Margaret Davis Cowan, and Ruby Davis McBee; one brother, Leo Davis; one son in law, Graham Davis; and one nephew, James F. Davis II.

The family of William Charles Davis created this Life Tributes page to make it easy to share your memories.